Choosing the right bat and rubbers combination is a daunting task. The new technologies in malleable rubber, carbon, titanium, and wood composites bats created endless possibilities suitable for all skill levels. Below you will find information and links that hopefully will help you make the right choices.

If you are new to the sport, be aware that your abilities and style of play are both extremely important in the selection of a bat and rubber combo. There is no point of spending a ton of cash on your equipment until your game has evolved.

If however you are somewhat experienced and you are still looking for the perfect bat, you may find in this page information that will help you in your quest.

If you thought that the blade selection was making a choice difficult, choosing rubbers will make you literally dizzy. In addition, good rubbers may cost you up to $80 per sheet, thus adding a significant cost to your combo.

There are 3 main types of rubbers: inverted, pips and anti-spin. Click on the words to find additional information on how the rubbers actually affect the ball and look at this video for even more information. 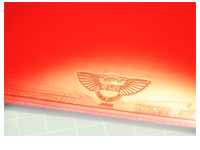 Inverted rubber has a smooth, grippy surface for generating lots of spin (with the exception of anti-spin rubbers which are smooth but not grippy). This is the most common type of rubber used by competitive players. 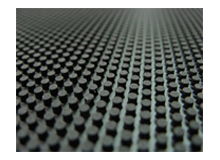 Pimpled rubbers or Pips (some people mistakenly call them “nipples”, “nips”, or “pimps”) have raised tubes in a uniform pattern (instead of a smooth surface), and produce different effects. 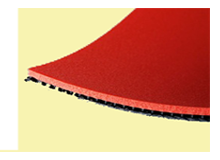 Antispin rubber is an inverted sandwich rubber with a topsheet that is unaffected by spin. These types of rubbers have topsheets with very little friction compared to most inverted rubbers, so that the ball tends to slide off the rubber when hit, instead of gripping on the rubber.

The majority of good players worldwide, including world ranked players use inverted rubbers. The name of the game is speed and spin and these rubbers are now the essence of the game. Pips and anti-spin are used by players who want to introduce deception to their opponents.

The rubbers are ranked by speed, spin, control, hardness, and thickness. Again, each of the manufacturer use their own grading method however similar to bats, and do give their rubbers a category based on the players’ style of play. Of the 5 rankings, thickness is probably the least understood. The thicker the rubber is, the more the ball will sink into it generating more spin and more speed. Not to forget, the more the ball sinks into the rubber, the more the ball will take the spin of the opponent therefore require the player to put more spin than the opponent to control the shot. Most players should stick with 2mm or less unless looping is your style of play then 2mm is the minimum that should be used.

We use cookies on our website to give you the most relevant experience by remembering your preferences and repeat visits. By clicking “Accept All”, you consent to the use of ALL the cookies. However, you may visit "Cookie Settings" to provide a controlled consent.
Cookie SettingsAccept All
Manage consent

This website uses cookies to improve your experience while you navigate through the website. Out of these, the cookies that are categorized as necessary are stored on your browser as they are essential for the working of basic functionalities of the website. We also use third-party cookies that help us analyze and understand how you use this website. These cookies will be stored in your browser only with your consent. You also have the option to opt-out of these cookies. But opting out of some of these cookies may affect your browsing experience.
Necessary Always Enabled
Necessary cookies are absolutely essential for the website to function properly. These cookies ensure basic functionalities and security features of the website, anonymously.
Functional
Functional cookies help to perform certain functionalities like sharing the content of the website on social media platforms, collect feedbacks, and other third-party features.
Performance
Performance cookies are used to understand and analyze the key performance indexes of the website which helps in delivering a better user experience for the visitors.
Analytics
Analytical cookies are used to understand how visitors interact with the website. These cookies help provide information on metrics the number of visitors, bounce rate, traffic source, etc.
Advertisement
Advertisement cookies are used to provide visitors with relevant ads and marketing campaigns. These cookies track visitors across websites and collect information to provide customized ads.
Others
Other uncategorized cookies are those that are being analyzed and have not been classified into a category as yet.
SAVE & ACCEPT